Free counter The Many Names of Paradise <$BlogRSDUrl$> 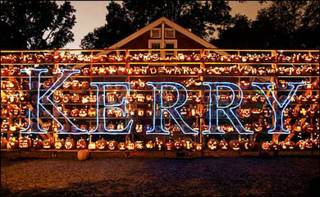 From the New York Times


Ahhh... that's better. I have scrambled over scrubby hill and slippery dale to find my cosy spot in front of a roaring fire, hot chocolate in hand, dog's nose resting on my leg. There are all kinds of sounds in fire, wild whooshes and pops and every once so often a fragile sound like glass breaking. Come on Winter! Do you worst. I am perfectly happy to hibernate till, well, at least until November 3rd.

After tossing and turning and worrying about the fate of the world and, tangentially, the ways in which proximate cause can be proven in a negligence claim, this article by way of Kevin cheered me immensely.

Of course, my second hot chocolate, literally, is doing much to smooth over any lingering malaise.

Okay, even I am frightened by this.

And in a testament to my prescience, my professor did in fact call on me Monday. There's nothing like a preemptory voice saying "Miss Willy" to get the adrenaline shooting through my veins. Happily, I had woken up at three to do the reading.

On a final note, in a glorious twist of registraral clemency, Tuesday nights mark the mid-point of my week, so sleep is in my sights. I love how the weekends are never far. Oh yes! And another debate! Yummy...


I sat down at the kitchen table with a pot of Cinnamon Plum tea today to do my reading. It was a beautifully classic moment of October with the sun coming in cheerfully through the windows and Dante blending into the floor at my feet.
And then I decided, in honor of that lovely, autumnal moment, I'd remove to the couch and read the Atlantic instead.

For my pains I was rewarded with this:

I opened up my shirt to show this man
the flaming heart he lit in me, and I was scooped up
like a lamb and carried to the dim warm.
I who should have been kneeling
was knelt to by one whose face
should be emblazoned on every coin and diadem:

no bare-chested boy, but Ulysses,
with arms thick from the hard-hauled ropes.
He'd sailed past the clay gods
and the singing girls who might have made of him

a swine. That the world could arrive at me
with him in it, after so much longing—
impossible. He enters me and joy
sprouts from us as from a split seed.


There was also an article on P.G. Wodehouse.

Ah to sin against the stern, scholastic gods and be rewarded for sin... These are ripe, plummy days indeed.
(Of course, this little indiscretion seals my fate tomorrow, as I will most certainly be called upon.)

Timothy Garton Ash, an international relations expert at Oxford University, drew rueful chuckles the other day at a panel discussion here when he dubbed Prime Minister Tony Blair's approach to the Bush administration "the inimitable Jeeves school of foreign policy."

Britain, Ash said, "is the wise old butler who stands behind this idiot nincompoop in the White House and is impeccably loyal in public but in private whispers in his ear: 'Is that wise, sir? Do you really want to invade Iraq?'

P.G. Wodehouse and trenchant political commentary-- be still my heart!

Poem of the Moment

Reader unmovâd and Reader unshaken, Reader unsedcâd
and unterrified, through the long-loud and the sweet-still
I creep toward you. Toward you, I thistle and I climb.

I crawl, Reader, servile and cervine, through this blank
season, countingâI sleep and I sleep, I sleep,
Reader, toward you, loud as a cloud and deaf, Reader, deaf

soon you will leave me, for an Italian mistress:
for her dark hair, and her moon-lit
teeth. For her leopardi and her cavalcanti,

for her lips and clavicles; for what you want
to eat, eat, eat. Art-lover, rector, docent!
Do I smile? I, too, once had a brash artless

feeder: his eye set firm on my slackening
sky. He was true! He was thief! In the celestial sense
he provided some, some, some

(much-needed) relief. Reader, much-slept with and Reader, I will die
without touching, You, Reader, You: mr. small-
weed, mr. broad-cloth, mr. long-dark-day. And the Italian mis-

fortune you will heave me for, for
her dark hair and her moonlit-teeth. You will love her well in-
to three-or-four cities, and then, you will slowly

sink. Reader, I will never forgive you, but not, poor
cock-sure Reader, not, for what you think. O, Reader
Sweet! and Reader Strange! Reader Deaf and Reader

Dear, I understand youyourself may be hard-
pressed to bare this small un-necessary burden
having only just recently gotten over the clean clean heart-

break of spring. And I, Reader, I am but the daughter
of a tinker. I am not above the use of bucktail spinners,
white grubs, minnow tails, Reader, worms

and sinkers. Thisandthese curtail me
to be brief: Reader, our sex gone
to wildweather. YesReaderYesâthat feels much-much

You are cold. You are sick. You are silly.
Forgive me, kind Reader, forgive me, I had not intended to step this quickly this far
back. Reader, we had a quiet wedding: he&I, theparson